This past week, we developed the initial design of our engine architecture. The diagram is broken down into layers, where the layers above depend on one or more systems on the layers below. The legend on the right of the diagram describes the meaning behind the colors and shapes; colors are for how the system will be used and shape is whether we will be build. Run-time Engine systems are ones that will be built with the engine and are required at runtime of the game. Offline Engine systems will be packaged with the engine but won't be used at runtime by a user, rather, all actions will be done prior to playing the game. For Engine Development systems are solely for engine developers' benefit and don't need to be packaged with the engine DLL1. Going to Make signifies we are building this system from scratch, where Try to Make means we are going to attempt to develop the system. However, if we can't get a functioning system within an allotted time we will substitutes ours for a 3rd party library. The 3rd Party systems are all of the systems that we won't be developing ourselves, but rather integrating into the engine and creating a wrapper2 for the end user. The If Time Permits category are for components which aren't necessary for the engine, however could be useful for the game developer.

Believe it or not, our architecture does have some semblance of organization. On the left side of the diagram, we list our engine's layers. The layers of a game engine range from very vague to extremely specific, and we've made ours somewhat vague to keep us from being architecture astronauts3 and spending too much time on irrelevant details. But we have made some distinctions here because engines, like most software, have tons of dependencies.

The architecture is divided into 10 main sections: core, tools, networking, graphics, input, audio, collisions, gameplay, build resource management, and build. These sections were pulled from our understanding of engine architecture after reading Game Engine Architecture, however other authors categorizations of engine design also overlap with our systems. For example in Game Engine Design and Implementation, Alan Thorn lists the Render, Resource, Scene, Input, and Error Managers as the essential managers which overlap with our Graphics, Build Resource Management, Scene Graph, Input, and Tools respectively cover his categories. We have broken our architecture more granularly to help see which features we need to be developing. For decisions on 3rd party libraries see our other blog.

Core systems are the underlying foundations of all other systems/modules like the audio engine and rendering engine. They are like the screws and bearing upon which everything else runs. Due to this nature, a big percentage of the core systems do not depend on other parts and is self-contained (STL, math, memory allocation system, assertions, parsing, string hashing, engine config, and timer are all systems that are dependency-free). Here is a list of our core systems:

This system allows us to have a good amount of customizability based on the architecture of our engine as well as being simple enough that we don't foresee significant difficulty with its implementation. The debugging system will also be expanded with the graphics wrapper which for debug drawing and an in-game console. 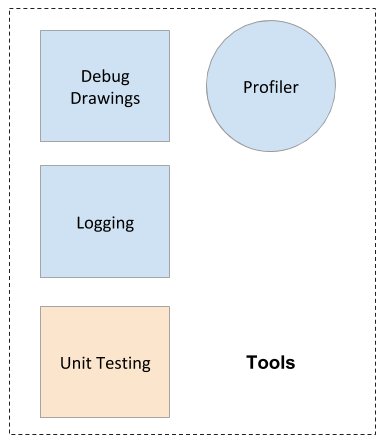 Networking is straightforward conceptually: You click a button, that click is communicated across a wire all the way to another computer, and it receives the click and responds to it. The model becomes messier as you include details like state synchronization and authority, prediction, and the mode of networking such as peer-to-peer or dedicated server. In fact, it becomes so messy that it's one of the hardest features to retroactively fit into a game!

Networking is also a domain that none of us have experience with, which makes us pretty terrified. It doesn't help that every industry developer we've consulted with has remarked on how bad of an idea including networking in our engine is. This means we need to hit it early to determine just whether or not it's doable, let alone in scope.

We found some promising libraries online that we want to build from to skip as much of the headache as possible, but we fear that the networking will start simple enough then grow into something unsustainable. In any case, we're going to try networking!

Our solutions for state synchronization and game management will be very naïve - e.g. Warcraft 3 style: one person hosts a room, and the others join it. The host is the server and holds all of the world data, and others sync to that. It won't provide the best experience, but our game isn't exactly aiming to be Journey.

Graphics includes rendering objects on the screen, animation of skeletons, skinning, model importing, materials, and calling render update. Really, this is one of the biggest chunks of a game engine, but you can also make it pretty barebones.

For our engine, we have decided to use a 3rd party 3D rendering engine. Although some of us have graphics knowledge and interest, creating a rendering engine which has enough features for creating a game is no small task. The problem is it can include features which could span 3 months on their own. Rather than focusing on something we have an idea about, as well as something that is fairly well documented, we will be integrating a 3rd party library which has its own unique challenges. With this, we have to choose which 3rd party library to integrate as well as develop a wrapper around the rendering engine. It is important that the rendering is only exposed as specified by the engine. The graphics will be integrated into other system components, including the module start-up/shut-down, engine update loop, and debug drawing. Since this is such a large component of our game engine, we selected the library early.

The input is the system which directs all input from external devices into the game engine and up to the game. The input system can have multiple layers and fairly abstracted depending on how much your engine is aiming to support or be cross-platform.

For our engine, since we will be focusing on the twin-stick genre, this requires our engine at a minimum to support some type of controller. Although twin-stick shooters can be played on keyboards, Wiimotes, and other peripheral devices, we have chosen to support Xbox 360 controllers. 360 controllers are advantageous because of their compatibility with Windows, plus the fact that we have a few readily available. Ideally, we will abstract our input to be able to support keyboard and mouse. Right now that's a secondary device concern, though. Since most engines rely on the operating system for input and create a wrapper around this, we will also use a 3rd party library and create a wrapper for the user.

Sound plays a big role in almost every immersive experience. Every engine on the market probably includes an audio engine, and it's also good advice that sound in games should get as much attention as other systems and be included in the iteration process to match their huge influence on the final gameplay experience. By talking to industry professionals, we learned that studios usually don't build their own audio system from scratch. Instead, they tend to bring in audio middlewares (to get an overview of frequently used audio tools in the industry, see the post from Somatone Interactive). Therefore, to line up with industry standard and make our workload realistic, we decided to bring in a third party audio library.

We started by looking at the requirements of our game - to recap, our engine is going to be used to support a minimal networked twin-stick shooter. For this game, we will need t to:

That's all from the game side. Having an audio engine that supports this feedback will let us develop exciting and juicy gameplay. From an engineering and optimization point of view, though, we have some other requirements:

A collision system is exactly what it sounds like: The detection of colliders with other colliders including functionality like raycasting. This system is needed to ensure characters don't pass through objects, including other players if online, as well as doing raycasting to detect if you gunshot an enemy or if the player is in the line of sight.

A collision system is not equivalent to a physics system, physics includes much more calculation and possibly prediction. The collision detection detects collisions between collidable objects, which can vary in shape depending on what's supported, and have a callback function when triggered. The collision solver stops the colliding objects from passing through one another and can be more advanced as to "nudge" enemies running into a wall around corners. The requirements for our collision system are as follows:

Since we only need a subsection of a collision system's features for our test game as well as in general for twin-stick shooters, we decided to build that functionality ourselves. This is dependent on that the time remaining not to include something like the industry standard PhysX5. There is a benefit in developing our own in keeping things simple as well as getting familiar with some of the standard math questions that junior developers are asked when interviewing for a position.

As a very necessary step in the game engine usage process, we need some form of build system at the end of our pipeline for the engine. Assets and the level scene graphs7 will need to be processed for the built executable, and if the build process takes a long time, then caching those processed assets could help speed up the process as well.

We will obviously need to have some form of build system in our engine, but we're also interested in using asset caching or other optimizations to make the builds run a bit faster.

The use of all game engines, in the end, is to be used to make games, so a build of the engine is needed so that game developers can make those games. The engine needs to be packaged up such that it can be given to a game developer, and that developer is able to have the functionality they need without having access to the inner workings of the engine. Our goal with the engine will be to create a CMake, or something of the sort, which will create a DLL library to be included with the game code. The game build will include the engine DLL, and also have a CMake file which creates an executable of the game.

The resource page has been updated, too!